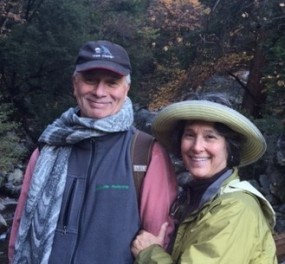 Next week, my husband and I will celebrate our 36th anniversary.

Some years we’ve gotten dressed-up and gone out to dinner. Other years we’ve simply marked the day with a kiss.

Once, we were both sick with the flu and I vaguely remember clinking our glasses of orange juice together and then sleeping right through the day.

Then there was the year when we were so embroiled in struggle that we let the day pass without even a word.

That’s what marriage is: richer, poorer, good times and bad. Each year with its surprises and challenges, its hard fought lessons, its moments of sweetness.

To honor our many years together, here are 36 lessons I’ve found most valuable:

1. If you think marriage would have been much easier with somebody else, you’re probably wrong.

2. Most marital problems are fixable. Really. Even the tough ones.

3. The D word (divorce) is a dangerous weapon. I suggest the F word instead: frustrated. Nobody’s heart will be broken if you say, “I’m so FRUSTRATED I could scream!”

4. The term wedded bliss should be stricken from every couple’s vocabulary. Marriage is wonderful in many ways, but expecting bliss makes the inevitable rough times seem like a problem when they’re simply part of the deal.

5. That bit about how your partner won’t change: Wrong. My husband and I met in our early twenties. If we’d both stayed just as we were, we’d still be two naïve kids, stubbornly insisting we have to have things our way, thinking marriage shouldn’t be as challenging as it is.

6. Marriage doesn’t get good or stay good all on its own.

7. Every one of us is, in our own way, difficult to live with. Beginning to work on even one of your own problem behaviors will make a big difference in the quality of your marriage. Added bonus: your spouse will greatly appreciate it!

8. People who are unhappily married sometimes think marriage is the problem — that marriage is unnatural or outdated or impossible to do well. There’s not a third entity called marriage. Everything that goes on between you is your creation. Each of you playing your part. Why not create something worthwhile? 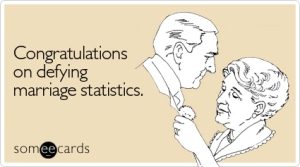 10. Struggle in marriage is not only inevitable, it’s necessary. None of us can grow a strong and healthy relationship without having to face and resolve difficult issues.

11. Even the best marriage can’t make up for the difficulties we faced growing up. We all come with childhood injuries. Thinking your spouse can make you feel safe and secure when you’re wobbly inside is too much to ask. The sooner (and more effectively) you deal with your “stuff,” the healthier and more satisfying your marriage will be.

12. Love grows as much from the challenges we face and surmount together as from the delights that we share.

13. Marriage is a long negotiation about how two people are going to run things. Money. Intimacy. Parenting. Chores. You can battle, or you can collaborate. Collaboration is a lot more rewarding.

14. Even the most stubborn among us can learn how to yield. Trust me on this one.

15. Most of your spouse’s upsets and frustrations aren’t about you — but some are. The sooner you figure out which is which, the better off you’ll be.

16. During hard times, commitment may be your saving grace. The fact that, way back when, you said “’till death do us part” may be the only reason you keep two feet in long enough to fix what’s not going well. And that’s reason enough.

17. Marriage can make you a better person or a worse person. It’s your choice.

18. Complaints and criticisms aren’t the same thing as requests for change.

19. Discouragement is one of the greatest threats to marriage. I’ve seen struggling couples give up on marriages that could quite likely be saved had they been given the proper guidance and encouragement to hang in there and fix things.

20. Thinking you have a 50-50 chance of ending up divorced makes it seem like a coin toss. It’s not. There are some behaviors that nearly guarantee failure. We all know what they are. It’s a good idea to not do them.

24. A good marriage will have its share of conflict, frustration, boredom, unresolvable arguments, slammed doors and nights where one person sleeps on the couch. The key is to have enough good things to balance them out.

25. It’s not always easy to keep your heart open.

26. Love matters. While love doesn’t heal all, even (especially) during hard times, love is a touchstone, a reminder of why you got together in the first place.

27. Marriage is not an antidote for loneliness. While marriage provides companionship, closeness and connection are not a constant. Sometimes we’re in sync. Sometimes we’re not. It’s important to be able to soothe and comfort yourself when need be.

28. It’s easy to get into a rut when you’re with the same person, year after year. Sex. Vacations. Dinner. How you spend Saturday night. Change things. Add some spice.

29. Most good marriages have one person who plays the role of the relationship “guardian”: The person who brings up difficult subjects. The person who stays hopeful in hard times. The person who acts as a steadying influence when one or both of you are getting worked-up. In an ideal world, that role would be shared. In the real world it only takes one.

30. One of the best things to do in the midst of a fight is to stop fighting. Take a break. Cool down. Come back to it later. Hotheads are terrible problem solvers.

31. Some conflicts cannot be resolved by compromise. (We can’t have half a child or buy half a vacation home). When there’s no such thing as “meeting halfway,” the solution becomes a matter of generosity, where one person says “yes” to their second choice and the other acknowledges that as a gift.

32. Fights are never about content. Where we store the dish soap, whether it’s quicker to take the frontage road or the freeway, whether it’s horribly rude not to answer a text — none of these are worth getting ourselves all in a twist. Our upsets are about the larger meaning we make of that unanswered text, that resistance to influence, that refusal to take seriously the things we request. It’s really helpful to accurately name what’s setting you off.

33. There’s a big difference between being happily married and living happily ever after. None of us are happy 24/7. Thank goodness we don’t need to be.

34. When you think to yourself, I really shouldn’t say this, you’re probably right.

35. Learning how to make up is essential since you’ll never, ever, get to a point where neither one of you screws up.

36. One of you has to go first. Apologize first. Be vulnerable first. Yield first. Forgive first. Why not let that person be you? 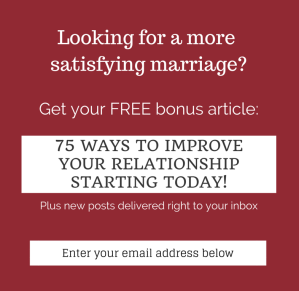 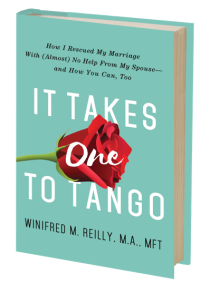